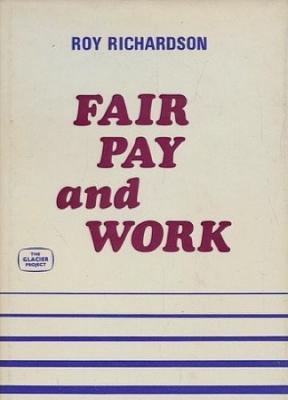 Perhaps two of the most fundamental problems in industrial relations are how to establish a criterion for fair pay and the associated issue of pay differentials. In the search for a solution the experiment described in this book marks a major development.

During the past two decades the Glacier Project, embracing the research of Wilfred Brown and Elliott Jaques, has achieved an international reputation for its approach to the practice of management. One of its most important contributions has been Jaques’ concept of time-span of discretion as a yard­stick for measuring levels of work and pay. But until recently the utility of his theory has been questioned by some academics and practitioners as lacking quantitative empirical validation.

Now, however, dramatic evidence of its validity has been produced in the form of a scientifically controlled experiment, organized by Roy Richardson at the Honeywell Corporation, which demonstrates that there is a direct relationship between time-span of discretion and felt-fair pay.

Dr Richardson here describes the theoretical background to his project, the details of its construction and operation, and its striking results. What emerges is not only a significant answer to a particular problem but, in addition, a superb theoretical model of a key relationship— that between manager and subordinate. It is likely to become a standard instrument for assessing any system concerned with work and motivation.

This is a seminal work for the large body of managers and academics who are interested in the development and application of Glacier Project ideas. It should also be required reading for anyone with responsibility for establishing pay structures both at a local and national level.