Levels of Work in Organizational Structure 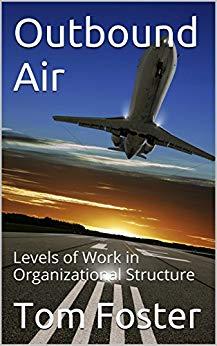 With lingering pangs of seller's remorse, Jim Dunbar felt, in the end, that he made the right decision to sell his company, Outbound Air. Everything Jim worked for, during the better part of three decades, was about to go sideways. He pushed open the door to the conference room and instantly became the center of attention. At the head of the table sat the new CEO, Al Ripley. On either side were minions of suits. Jim could smell the starch of white shirts in the room. Crisp, striped neckties reinforced the odor of formality. Al Ripley believed for every management problem, there was a management consultant. His purpose was always the same, cripple the adversary in front and drive them to their knees, even if the conquest was over a nickel in the company football pool. In this tale of deceit and corruption, Ripley creates systemic dysfunction that leaves Outbound Air to twist in the wind. Survival is optional.

Outbound Air is a fictional account of a regional airline acquired by an investment group. The story illustrates the adolescent pains of organizational growth as the new CEO takes one mis-step after another. Outbound Air's return from the brink of destruction is a vivid tale of how organizations work.