What Your University Forgot to Teach You 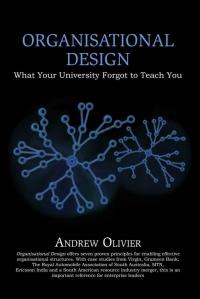 Organisational Design: What Your University Forgot to Teach You by Andrew Olivier is an in-depth analysis of Dr. Elliott Jaques’s organizational design model. In addition to coining the concept of a “mid-life crisis,” Dr. Jaques was both renowned and criticized by his peers in the 1960s and 1970s for organizational models that contradicted the norm and left little room for interpretation.

As a business consultant, Olivier states he has successfully applied Jaques’s theories to his client companies throughout his career and provides case studies showcasing the model in action. This is no mean feat, as the model is exceptionally dense and layered. It is comprised of seven “key principles,” in which four “domains” and seven “work levels” are housed, as well as complexity-based design theory, event sequencing, and time-focused systems.

The Seven Key Principles are:

Despite the confusing relationship between the theories, systems, domains, principles, sequences, and levels, the individual concepts are logical, if not banal. For example, Olivier describes the fifth principle on “Empowering Role Relationships” as “agree on authority levels for role relationships and ensure understanding to all stakeholders.”

Olivier notes that he wanted to write Organisational Design to provide an “entry point into this body of knowledge” because he believes Jaques’s work has been unfairly marginalized due to its incompatibility with other organizational design theories. (One detractor quoted here notes that “any theory not open to inclusion with existing theories is doomed to expulsion from the academic ranks.”) Standing on its own, Jaques’s seven work levels, providing a map for building an organization’s personnel structure, is indeed useful. And Olivier’s table on page 27 breaking down each level’s goals and suggested timeframe is worth reviewing.

But while his enthusiasm for both the model and man are apparent, Olivier generally fails to dissect the complicated approach in a manner that will be accessible for those unfamiliar with Jaques’s work. His book may be valuable for advanced organizational psychologists but is not recommended for novice and intermediate design specialists.