Social Power and the CEO

Leadership and Trust in a Sustainable Free Enterprise System 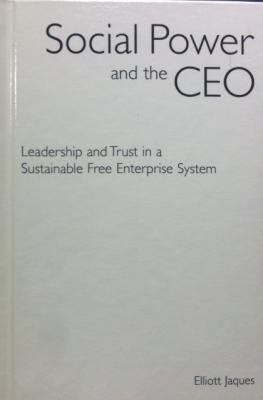 Social Power and the CEO:Leadership and Trust in a Sustainable Free Enterprise System by Elliott Jaques who argues that "The power of management is often squandered due to lack of knowledge. He offers a fresh, creative approach to managerial leadership and propounds a unique system of managerial organization".

The power of top management is pervasive and profound. It affects the quality of economic life, but also our personal and social lives. Equally strong is its impact on the sustainability of a free enterprise system. Psychoanalyst, teacher, and management consultant, Elliott Jaques argues that great as this power is, it is being squandered, not because of what managers do but because of what they don't know. Serious misconceptions about managerial leadership—and equally serious misunderstandings of people—abound. Jaques argues that the problems inherent in the way management is practiced are attributable to gravely dysfunctional systems of managerial leadership, systems that have evolved over the years and are now, despite their ineffectualities, taken for granted. He shows how the CEO class will determine the future of free enterprise democracy, but how massive misconceptions about human behavior have undermined its capability for leadership. It's the managerial leadership systems that need changing, he maintains, not the people who implement them. The result of more than a half century of thought, observation, analysis and experimentation, Jaques' book offers a totally new and creative system of managerial leadership and a unique system of managerial organization. In doing so, it becomes essential reading for academics, students, consultants, top management, and executives on the way up throughout the public and private sectors.

Jaques argues that the problem of achieving effective and sustainable managerial organizations does not lie in poor decision making, interpersonal stress, lack of innovation, greedy self-interest, and other ills and defects, although they certainly play a part. The art of management, somewhat like alchemy, is not securely grounded in science. This is its most severe weakness, and the reason why organizations have always been badly managed. He cites examples to show that management tends to blame its shortcomings and inefficiencies on other people, yet there is no research to prove that the source of managerial failure is really to be found there. People strive to do their best, he has found, but they are stymied by poor organization and systems that pitch people into conflict with each other. Jaques looks at these systems closely, particularly our current systems of compensation, and itemizes his findings, showing how the the same problems are to be found throughout industry, public service, health and services organizations, and less surprisingly perhaps, the military. He then lays out the ways in which a new system of managing operations and organizations could work, shows that it is already working in certain selected places, and provides convincing evidence that his assertions and recommendations have much to offer, as we continue to search for better, more efficient, and more productive, profitable organizations.