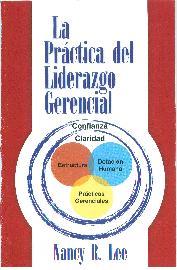 The practice of managerial leadership describes the comprehensive set of principles based on encompassing inclusive comprehensive scientific knowledge called The required organization, developed by Dr. Elliott Jaques and his colleagues through research work in consulting for more than 55 years in 15 countries.

Nancy Lee worked with Dr. Jaques for more than 20 years. This book is aimed at managers at all levels, and refers to the managerial role, which is the point where most need to have clear action guides to achieve the goals of the organization. The application of these ideas has the effect of increasing productivity and profitability, consolidating confidence and providing employees with a healthy work environment, which promotes personal development.

His thought was a monumental reformulation of the bases of human capacity and the structure of organizations, which is reflected in thirty books. Jaques not only raised the existence of eight different levels of conceptual thinking among human beings, but also elaborated the curves of that thought during adult life. In turn, this conceptual development laid the foundations for a new logic of the organizational structure, a field that until then had lacked this logic of leadership and respon- sibility in organizations.